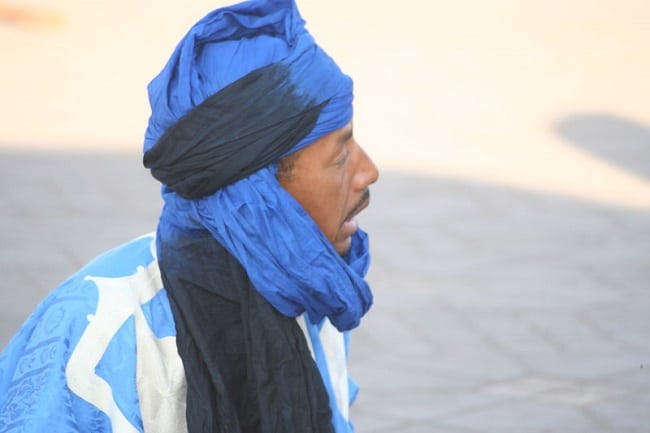 The Blue Men of the desert Morocco of the Sahara Although the Haalpulaar is the originators of indigo areas, it was the Tuareg who adopted and popularised this fashion. They are considered the “blue men of the Sahara Morocco“, a name given to them because the color of their clothes rubbed off on their skin when they were under the hot sun. According to Dr. Anja Fischer, a researcher in Saharan studies at the University of Vienna, the influence of the Haalpulaar may have led to major changes in Tuareg fashion.

Blue man of the desert Morocco

The Tuareg used to wear leather clothes, and at some point, they switched to the blue fabrics for which the Nomads are best known today. Proud of their nomadic heritage While elements of traditional dress have been lost in most Saharan towns, the men proudly wear their blue areas in Mhamid El Ghizlane. They have become such an integral part of Sahrawi Moroccan culture that even businessmen in smart suits wear a customized Daraa instead of a blazer.

Get in touch with us

Discover the Morocco desert tour for a weekend or a week, model your stay in Morocco at your convenience. Organize your cheap Moroccan Desert Tours, and discover the Moroccan desert .Take advantage of the best prices all year round.